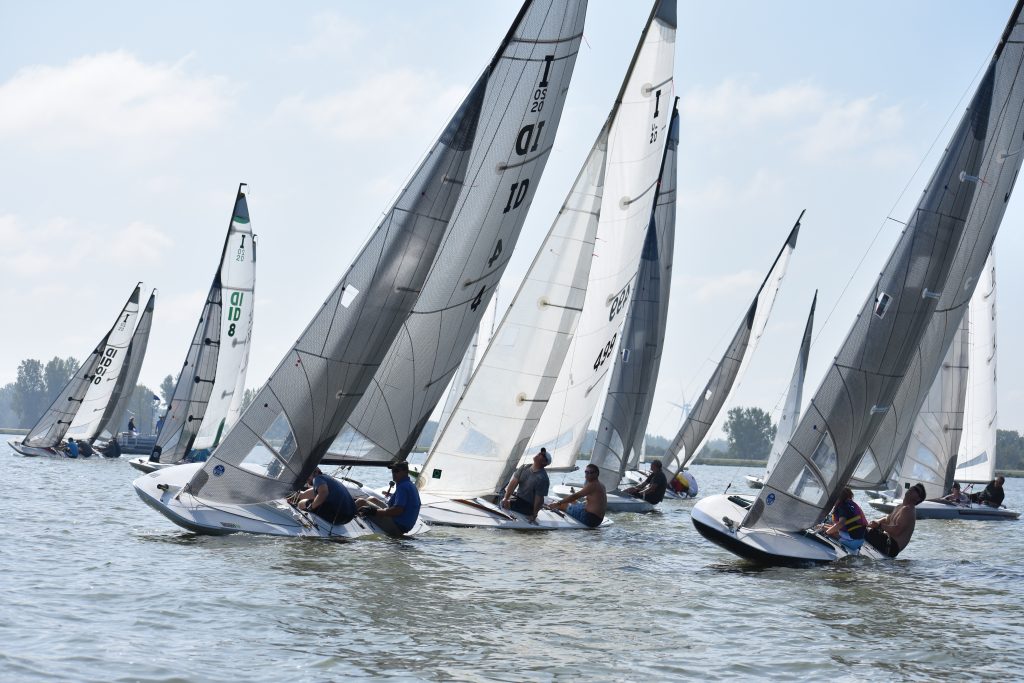 The 2021 National Championship Sept 17-19 will be at Lake Wawasee, Indiana. Indian Lake, Ohio held its spring regatta June 26-27, but the event was blown out with gust profiles both days beyond 30 mph.

In place of the race, NISSA Vice Commodore Joe Ewing held two days of chalk talks and tuning demonstrations, mostly aimed at the newer scow racers, but everyone attended. Ewing got great reviews for unspooling a number of speed secrets.

“I feel like the folks at Indian Lake really downloaded incredible knowledge that weekend,” said Potomac sailor Justin Harler. “Joe Ewing, Jeff Patten, Brook Patten, and the whole gang there at Indian Lake are incredibly welcoming. It’s like this whenever we show up,” said Stew Harris, another out-of-town guest.

A special feature this year was the Greek dinner put on by Jane Patten.

The East Coast I20 fleet announced that it has cancelled its Rehoboth Bay Regatta in Delaware, which was to be the weekend of Aug. 15-16. Instead the sailors will offer a tuning and training scow camp. Registration was off from previous years, according to the promoter, who said many I20 sailors are focusing on family vacations now that they are possible post-pandemic. The venue is an inland bay just 200 yards away from the Atlantic with steady ocean breezes filling in every day.

I20 Class Commodore Andy Allen welcomed the return of racing after 2020, a pandemic year that saw cancellation of all multi-day regattas, including the 2020 championship.

Watch notice of races posted to the Inland20 website as they are issued.