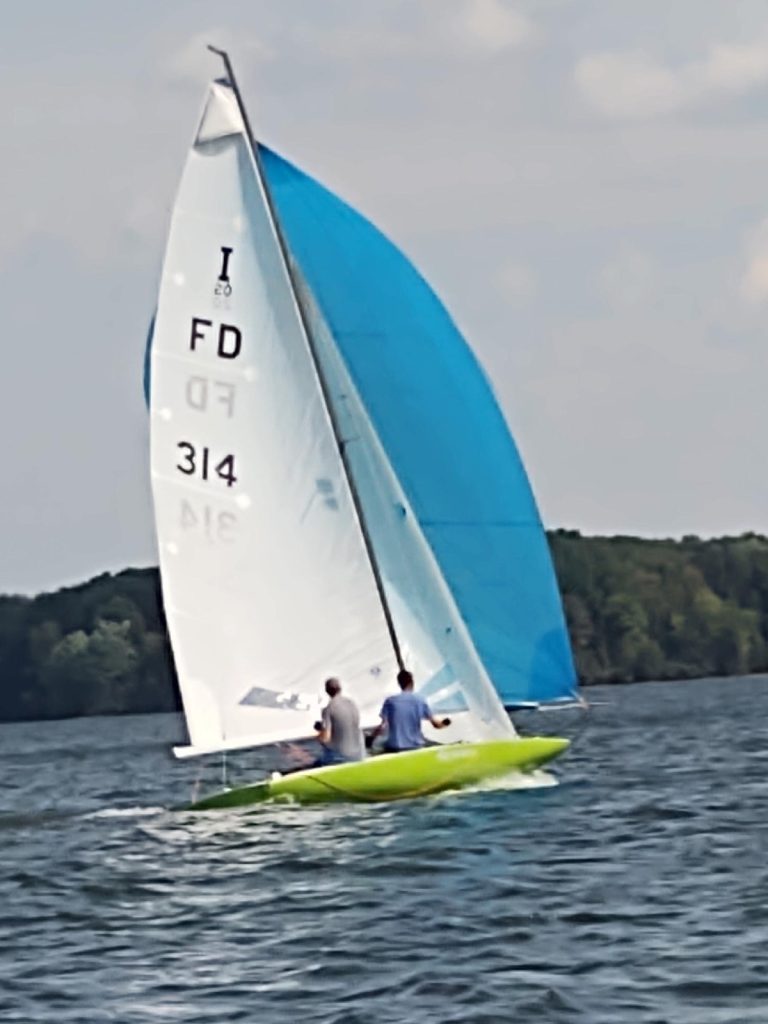 The 2023 Inland20 regatta calendar is filling fast, with at least four national regattas, capped by the National Championship at Indian Lake, Ohio, Sept. 15-17.

Camping on the Indian Lake grounds is a great way to make new friends and dine inexpensively, but Ewing said his club will also generate a list of housing and breakfast options.  Indian Lake has hosted several successful Inland20 championships.

Additional national regattas are also in the works.

A “promotional” regatta July 8-9 will be held at Chautauqua Lake, NY.  Eric Hall and his employer, Ready About Sailing, are hosting the event, designed to introduce the I20 to New York state sailors.

“We’re working to build a fleet here at Chautauqua so it would be really great if all the fantastic I20 sailors could join us that weekend and inspire others to sail the boat,” Hall said.

The weekend will feature racing on both ends of the big lake.  Saturday will start with races in the north, hosted by the Chautauqua Yacht Club (CYC), near the Chautauqua Institute. The regatta will finish on the southern end of the lake Sunday, with races hosted by Chautauqua Lake Yacht Club (CLYC) in Lakewood, NY.  An evening dinner is being planned at the CLYC dining room, a great place to eat. The location is famous for its wet bar made from a wooden E-scow.

Two additional regattas are also under planning for May and June.  The first will be held on the Potomac River at Spotsylvania State Park in Virginia, about 30 minutes south of Washington.   A date will be announced later in January, according to the host, the I20 Fleet of the Potomac in association with Lightning Fleet 50.  (This event was canceled last year due to gale force winds over two days. )

Indian Lake OH is also planning a spring regatta for June.  Joe Ewing said the date will be announced later in January and will be a great tune up for the national championship later in the year.